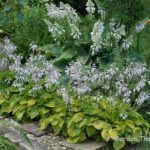 It’s understandable that this question is asked, because of the way the hosta flower blooms and the way the flowers fade on the stalk.  The decision of when to cut hosta blooms ultimately becomes a matter of choice depending on your purpose for the plant.

How long will hosta blooms last?

Hosta flowers bloom along the stalk, maturing at the bottom first.  Some varieties bloom quickly from bottom to top, and maintain a somewhat consistent stalk of blooms for weeks.  Others will take weeks to open the final bloom at the top.  With longer-blooming varieties, flowers at the bottom of the stem may be wilting before the top flower buds have begun opening.

What if I don’t want hosta flowers at all?

Hosta are very durable plants once established.  On established plants (2 years or more), you can cut hosta flower stalks any time during the blooming process.  In my experience, cutting the stalks and never allowing the plant to bloom has no adverse effect on the plant.   Likewise, allowing the stalk to bloom entirely has no adverse effect on the plant.  It’s just a matter of choice.

When I decide to cut back my hosta blooms, it’s because they are starting to get messy.  When the faded blooms start falling onto the tops of the leaves, they can get cupped by the leaf and get stuck there.  If they get slightly wet from a light rain, when they dry they adhere to the leaf and are a big job to remove.  This is typical of the flowers that bloom for weeks at a time.

There will be many additional weeks of summer left to display your hosta after the flowers are gone.  You decide when to cut stalks based on your purpose for the plants – if you favor leaf display or the plant is a focal point and you don’t want the dead flowers on the leaves, remove the stalks sooner.  If the base of the plant is not highly visible and your purpose is for the tall flower display, the dead flowers on the leaves may not be an issue for you.  Of course, there is always the option to let the entire stalk bloom and you remove the dead flowers from the leaves manually, if you have the desire.

I will sacrifice a partially -bloomed stalk in order to keep the leaves clean, because the leaves are the purpose for my hosta.  Bees and hummingbirds have had many opportunities to visit the flowers up to this time.  You can use the partially bloomed stalks in cut flower displays as they are stunning and last a long time.  They will even continue to bloom in a vase.

How to cut hosta flower stalks

Cut the stalk as far down to the base as possible, or at least under the top leaves.     If you have to remove worn leaves during the season, you don’t want the stalks to become visible, as they do turn brown as they dry.  Remove in the Spring with a side to side wiggle – the stalks will typically break at the base and come out cleanly, making room for new leaf growth.